SplitMyFare had been running successfully for about a year taking advantage of a “hack” of the British Train System that made “splitting” the tickets into smaller journeys for the same trip result in cheaper tickets.

With traffic going up, they saw the need to improve their user experience, since their older non-mobile-friendly website was confusing, slow and complicated. The idea would stay the same: people would search for a train trip and the system would find ways of splitting the ticket to get a better price. The value proposition had to remain clear: save money.

From API Behaviour to User Experience

The complexity in this project relied on the fact that the API they use to find and book these split tickets belongs to an external provider, and has a specific behaviour.

I can’t publish all the user journey mappings or this would turn into quite a complex showcase, but I’ve made a small graphic to show how this API would expect the search/booking flow to go. The system searches for matches within a journey, for example Manchester Picadilly to Arlesford, Essex on 15.12.2019, with return included. The API would display both fixed and flexible tickets, some that allow “split” booking, and some that don’t.

Once the user had selected the outbound journey, only then the compatible returns would show up. 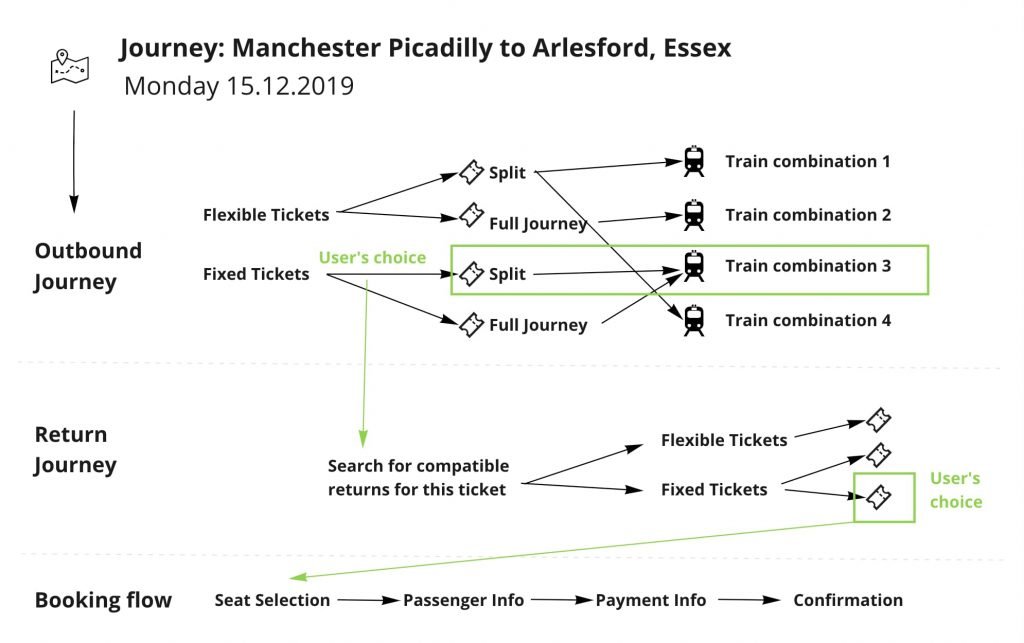 So I needed to come up with a structure that would support this journey, but at the same time not overwhelm the user. On top of all these restrictions from the technical implementation, we also had to keep lots of legal requirements in mind.

Finding the right structure, that fits on a mobile screen

An intense process of wireframing and testing began, where not only did we have to come up with a great UX solution, but we also had to comply with the rules of the API provider and the train regulators that would enforce transparency and specific measures that all train providers had to comply with.

I simplified the approach to how other providers would do it by making the value proposition stand out before all. So I came up with this very simple table where users would be able to see the trains, the prices and which of them were split fares. There would be two columns: Cheapest and Flexible, to tailor the users needs, and just the four options that better fit the users input.

The selection of outbound journey would be first, and only after making a ticket selection, the user would proceed to pick the return trip. In case it was a one-way journey search, the user could choose to add the return later.

Focusing on the value propositon

After some tests, we realised we couldn’t explain the user everything. And if we gave all the options as possibilities, we would scare the user away. So we decided to focus on the value proposition: people were in the site to get cheaper tickets, so we were going to help them find them quickly.

The smallest amount of options but bigger discounts helped the users make a faster decision, and with just two clicks they could quickly select their journeys and see the saving right away, and at all times during the booking. This made the returning customer over 62% likely to purchase again from the site.

Through the booking process, we would reinforce the savings to motivate the user to finish the purchase. We found this very effective, and that it led to many more bookings.

Generating trust by being transparent

At the beginning, we were a bit overwhelmed about the amount of information required by law to be displayed. But instead of panicking, I was able to implement information design to our favour, where good hierarchy and typography allowed the user to quickly know where to focus, but also dig into the specifics.

There is so much that can go wrong with a complex travel booking, but we made sure to keep overviews and details in front of the user at all times, which led to a big decrease in cancellations and ticket refund requests.

Project Highlight
Because of how strict regulations were, the design process for this site was a constant negotiation. We had laws, terms and personal requirements to juggle with. The train providers and bus providers were different and had different requirements too. But ultimately I was able to guarantee a great booking experience in spite of all the extra requirements and workarounds we needed to implement so that everyone was happy.